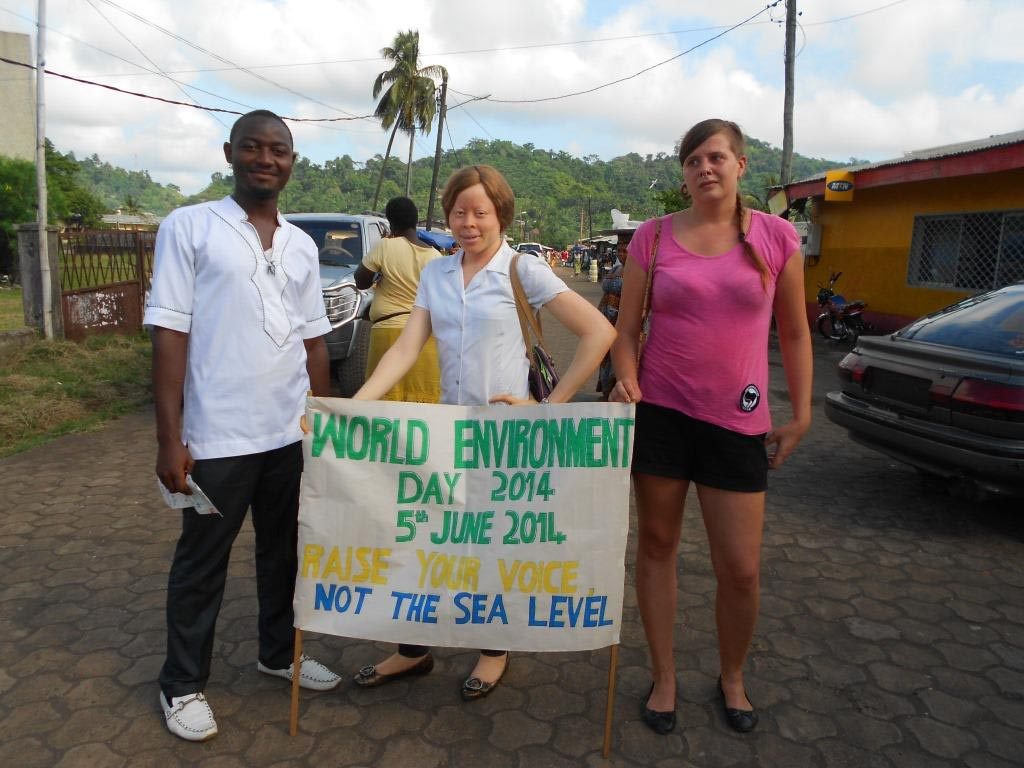 World Environment Day 2014 as marked by the United Nations (UN) was celebrated internationally on June 5th 2014. As an organisation concerned with the protection of the environment, OGCEYOD staff and volunteers felt compelled to join in the campaign with this year’s theme: Raise your voice, not the sea level! This year’s World Environment Day was focused especially on Small Island Developing States (SIDS) but the problem of rising sea levels is also a great concern for African coastal states including Cameroon. OGCEYOD is based in Limbe, a town which is also being greatly affected by sea level rise so as an organisation we decided to concentrate on the impact of sea level rise on our local community.

OGCEYOD staff conducted research into the effect of sea level rise (SLR) on a global, national and local scale. It was discovered that the sea rose approximately 10-25cm in the last 100 years and that this trend is set to increase this century. According to UN Water, a third of the world’s population of 7 billion live within a hundred kilometres of the ocean, leaving many of them subject to coastal flooding every year. The burden is especially severe in developing countries and small island states. SLR affects a number of African countries which have coastlines. It was also established that mangrove swamps, which are incredibly important ecologically because they provide spawning and nursery grounds for many coastal fish species. They also serve as the habitats for some of the crustaceans and molluscs. It was noted that Cameroon’s coastline, especially around Limbe is characterised by mangroves and that we should ensure that they are protected. Mangroves that could protect Cameroon from rising seas may be subject to more pressure than they can bear, as people migrating to the country’s southwestern coast clear trees at a rate so fast they can’t regenerate. The trees’ roots spread across a large area, soaking up water and encouraging sedimentation. Furthermore, in Cameroon, where 25% of the population (4 million people) live in coastal lowlands (6.5% of the total area), SLR will have a profound effect on some of the fastest-growing metropolitan areas and ecologically important coastal wetlands. As a high proportion of the population live in coastal towns such as Douala (with a population of 2.5 million), Kribi, Limbe and Tiko. The phenomenon of sea level rise is likely to have a significant impact on Cameroon’s coastal population as its 402km coastline is dominated by low-lying, swampy geomorphic features of beaches, extensive creeks and lagoon formations. Three-quarters of those living in coastal towns live on strips on land a thousand metres or less from the shoreline and many just a meter above sea-level. Therefore, it is clear that rising sea levels are having, and will continue to pose a threat to our environment, biodiversity and human populations. It was clear that Cameroon, and Limbe and a coastal town, is being affected so this year’s World Environment Day theme: ‘Raise Your Voice, Not the Sea Level’ is especially relevant for us here at OGCEYOD Cameroon.

OGCEYOD volunteers decided the best way to address World Environment Day was first to ensure that everyone in OGCEYOD were well versed on the impact of sea level rise on a global level, within Africa, Cameroon and more specifically Limbe. Rosa and Maxilinos researched the impact on SLR on Cameroon and Maxilinos presented the findings in a short expose to the office on June 5th, World Environment Day itself. OGCEYOD members also wore green on this day and made a banner to mark World Environment Day. We decided that we needed to inform the community about the impact of SLR on Limbe and the whole of Cameroon. We also wanted to promote environmentally friendly practices to reduce the impact of flooding as the rainy season is now upon us. Therefore, volunteers spent the day hand-making colourful flyers which would be used to inform the public of World Environment Day 2014, its theme and the impact on Limbe, the South West Region and Cameroon as a whole. The flyers also contained advice about how to protect the local environment such as: ‘don’t throw dirty in our gutters, it contributes to flooding!’ and ‘let’s stop cutting down our trees’. On Monday 9th, OGCYEOD volunteers went to the field to distribute flyers, taking with them the World Environment Day banner that had been prepared. The team went to Down Beach, Limbe to engage with the public. The location was chosen as it is a place where people often go to relax but also because it is an area greatly devastated due to flooding during the rainy season. It proved a great opportunity to all volunteers to engage with the public and relay the information they had learned during the World Environment Day training session. It also boosted the confidence of many volunteers as they were encouraged to talk to people they didn’t know on their own. Soon all the volunteers had run out of flyers and between us we had sensitised nearly everybody around the Down Beach area. After a quick discussion, the OGCEYOD team decided they wanted to continue to sensitise the local community so devised a strategy that didn’t require the flyers. The team moved to the Bukaroo area of Down Beach where Max gathered groups of people who listened to him talking about the impact of Sea Level Rise and what we as individuals can do to try to prevent it. He spoke enthusiastically in Pidgin and successfully engaged with several different groups including women working at the fish stalls and some young men in a bar. Overall the sensitisation campaign was deemed a great success as we were able to reach groups which are hard to access through our typical community sensitisation programme. All involved in the World Environment Day programme declared the day a great success and expressed a desire to use the strategy in the future. Whilst spreading the message and educating the public, the grassroots approach used gave confidence to the volunteers whilst also uniting them as a team. 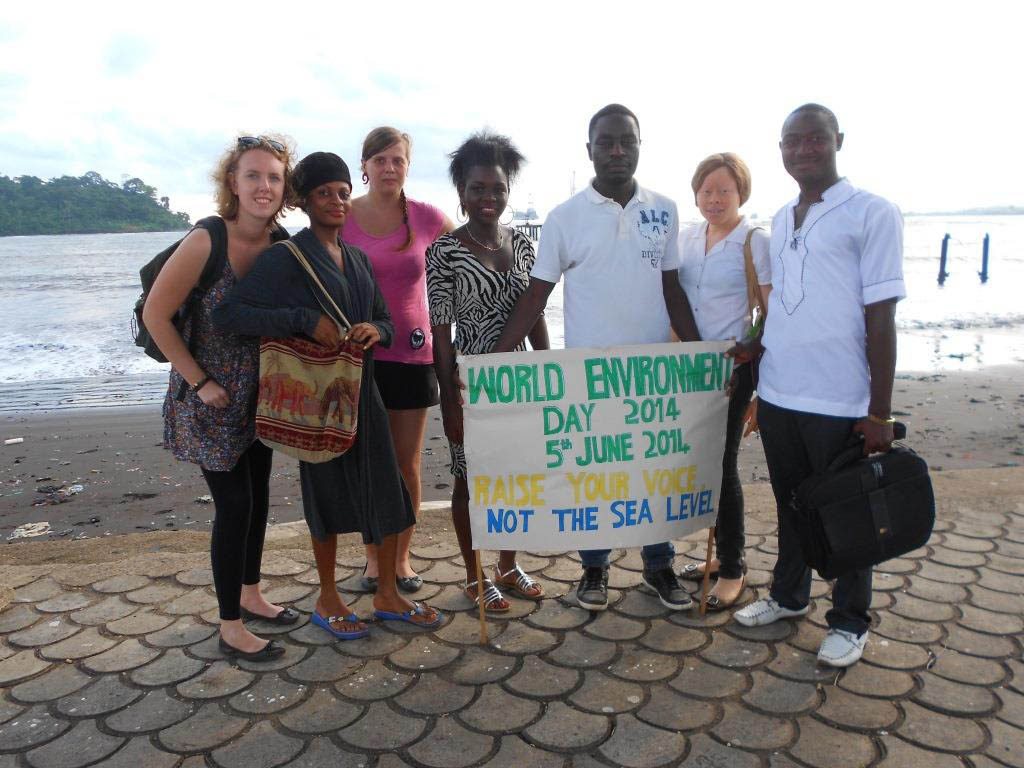 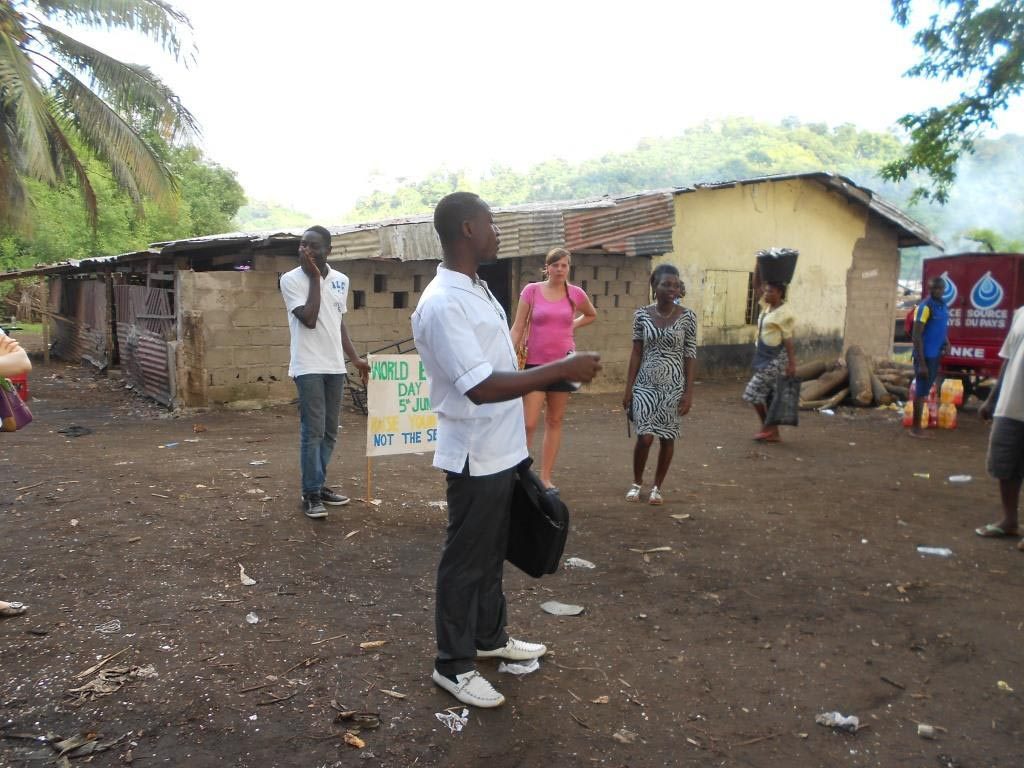 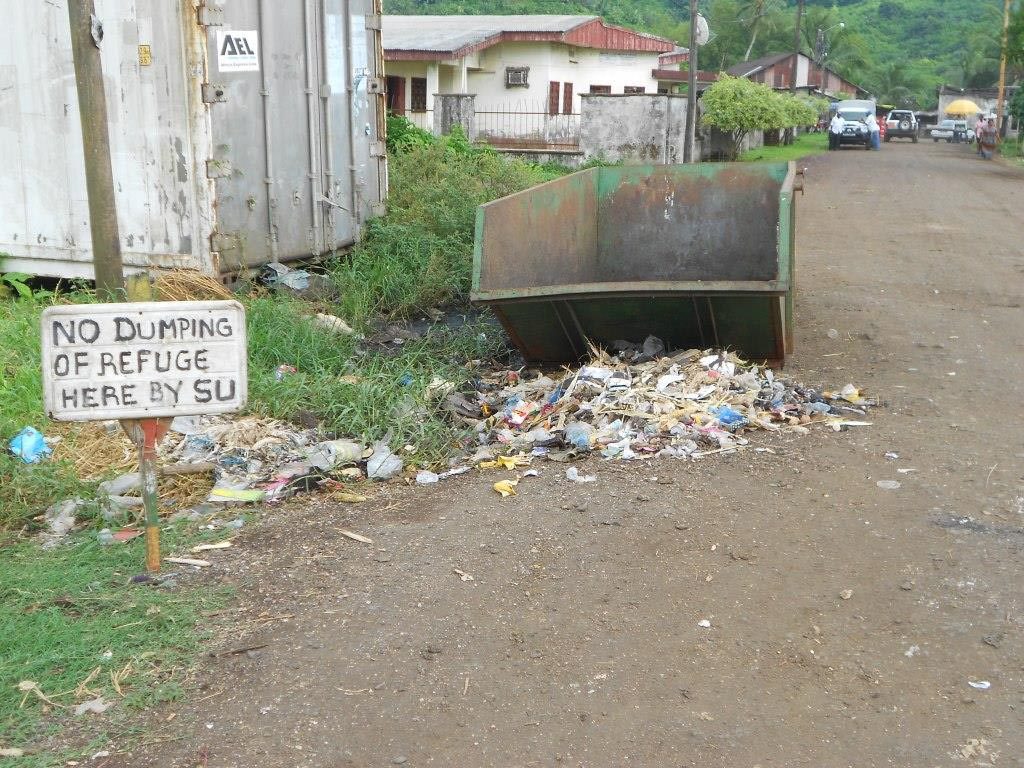 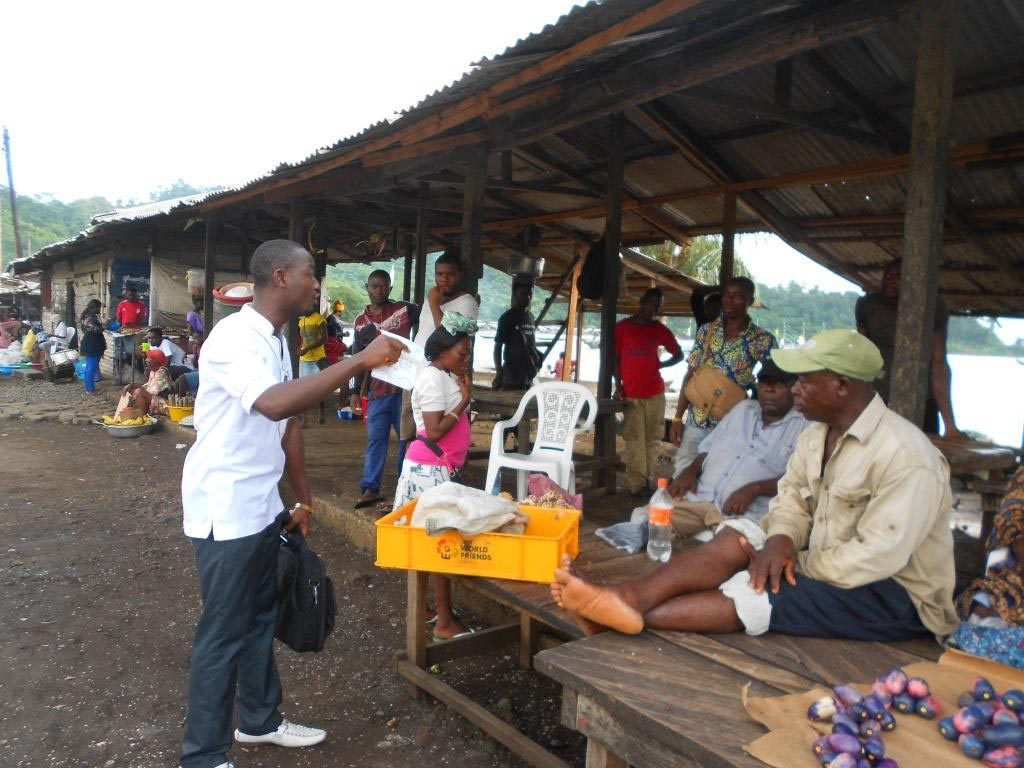 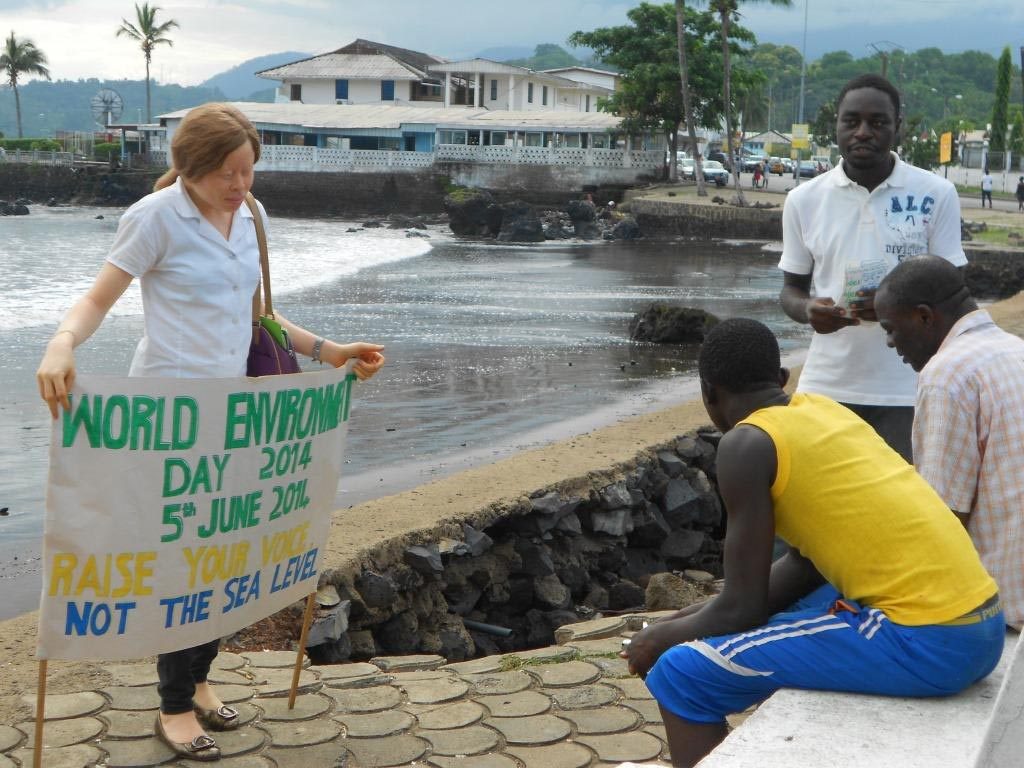 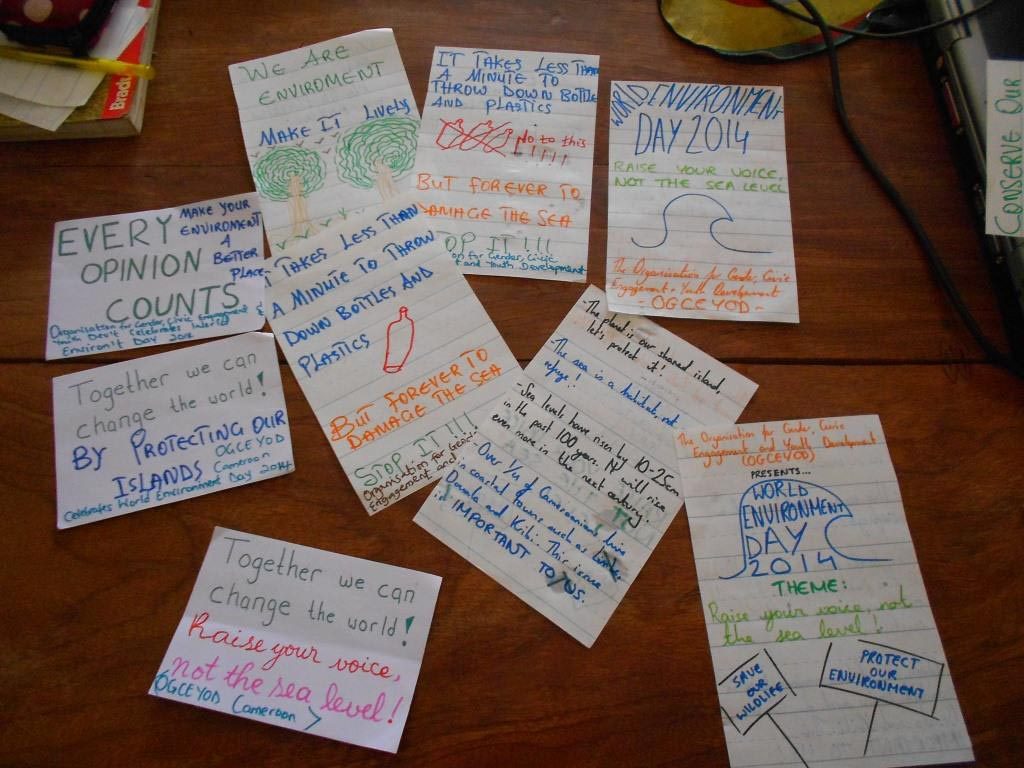 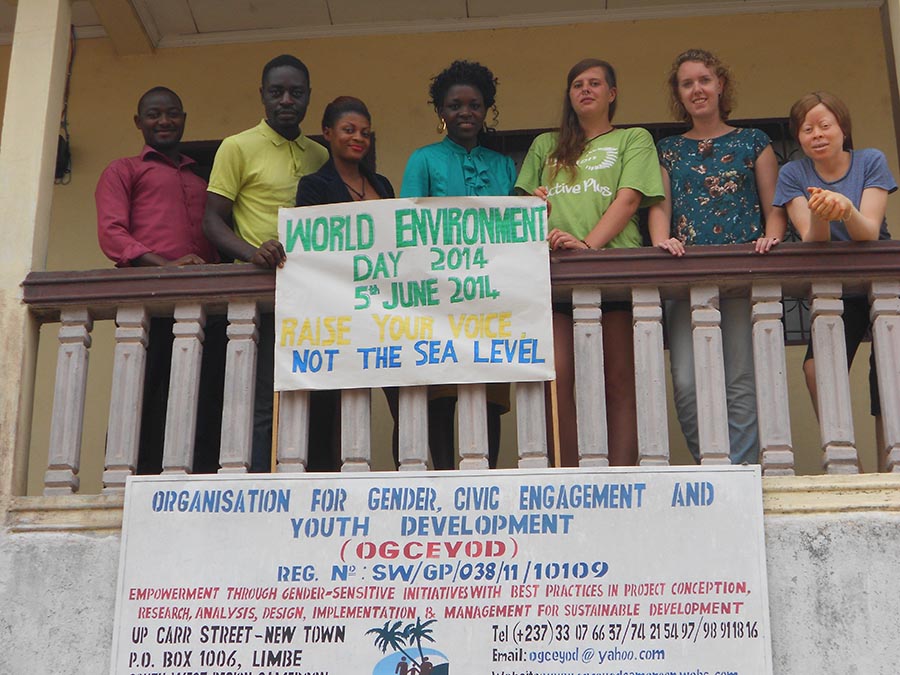 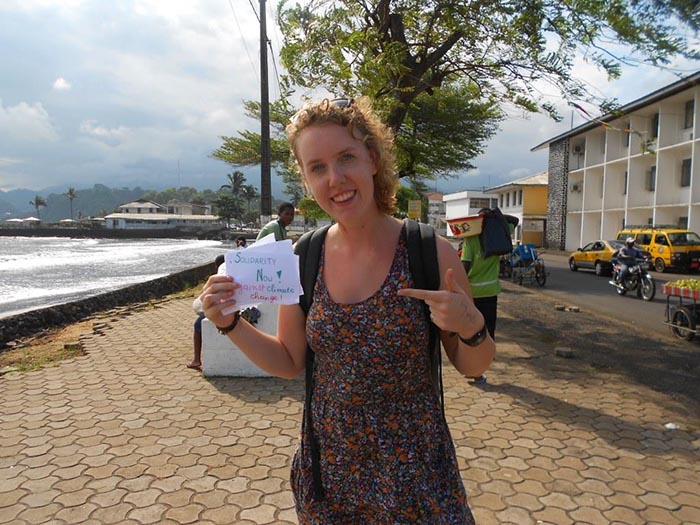