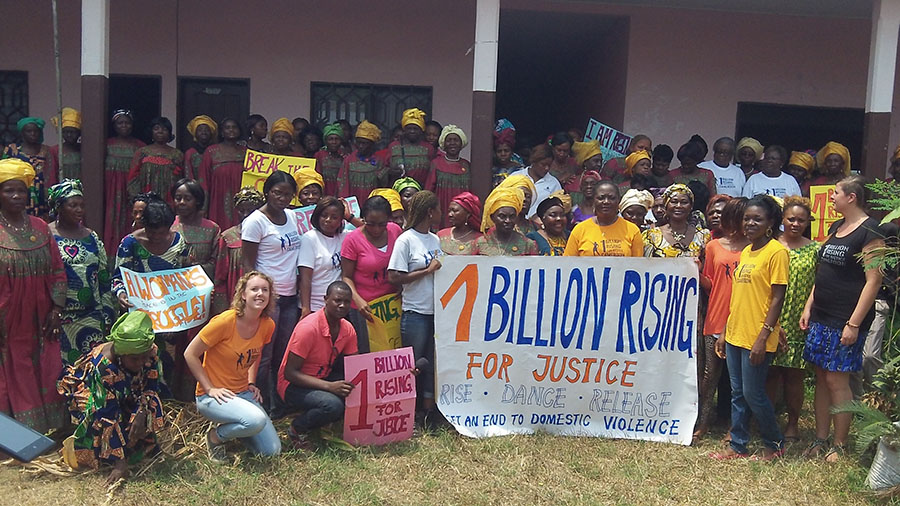 One Billion Rising for Justice – Cameroon

Violence against Women is a global issue. All around the world women are molested, battered and raped inside and out of their homes, by strangers, by intimate partners, by their husbands or by other family members. UN statistics state that at least one third of all women of the world have been subject to gender related violence at least once in their lives. February 14th, 2014 marked the second global “One Billion Rising” action day. The “One Billion” in the campaign title stands for the third of all women populating the world who have experienced gender related violence at some point in their lives. The day of action also carries the alternative title “V-Day”. This is a direct homage to “V(agina)-Action-Days” of 1998, as February 14th, 2013 which was the date of the first “One Billion Rising” action day, marked the 15th anniversary of this campaign. The “V(agina)-Action-Days” we’re triggered by a statement the conservative US politician Todd Akin made. He stated, that abortion is immoral and should not be allowed, even in the case of pregnancy through rape. He further argued, that a woman’s body was only capable of getting pregnant if she enjoyed it.

In Cameroon more than half of women (55%) have experienced physical violence, mostly perpetrated by current or most recent husbands, brothers or sisters, mothers, fathers, or step-parents. For 20% of Cameroonian women engaging in sexual intercourse, their first time was by force, the same goes for  the 30% of those who had their first sexual experience before reaching the age of 15. 60% of the women in Cameroon who have been married have experienced physical, sexual or emotional violence from their current or most recent husband. Of those who have experienced marital violence 43% have had injuries as a result. Wife battering and marital rape, like the forms of gender based violence already displayed, are consequences of an attitude of treating women like property. This attitude is also reproduced and promoted by things like the husband’s right to punish his wife with physical violence, the “bride price” or “bride’s worth” which for one tends to give the husband the impression of having “bought” his wife, but also degrades a woman to an object you can put a price on.

All of this is why we decided, that Cameroon has to be a part of the “One Billion Rising” Campaign. So we put together our own “Rising” at the Women Empowerment Center in Limbe, on February 14th, 2014. We made designs for t-shirts and had them printed, we distributed flyers at bars and clubs on ladies night, rented a sound system and got the Women Empowerment Center as venue. When the day of the 14th had come, we were ready to go. The Rising was opened with a word of prayer by  Mrs. Mboh. She was followed by our Executive Director Elvis Wepngong introducing OGCEYOD and explaining the importance of gender sensitive education. After his introduction it was time for a speech by the Delegate of Women Empowerment and the Family. She spoke about different forms of violence women have to face in Cameroon. But she did not only speak about domestic violence, but also about the economic and emotional violence women have to deal with, as well as pseudo-solution strategies they have to put up with here. After her heartfelt speech it was the project coordinator Maike Möllendorfs turn to introduce the campaign and it’s goals. What it is, what it is meant to do, and it’s history. After the speeches the women participating in the rising got the chance to stand up and make their stories heard. Two courageous women seized this opportunity and told their sad stories. The first woman to speak told the story of how she ended up in an abusive relationship with an unfaithful man, after loosing her parents at a very young age, and also gave inspiration by telling the round about 150 participants how she got out of it. The second woman to speak up was the President of the Social Widow’s Association. She told the horrible story of a woman who had faced extremely degrading widowhood rites after her husband’s death. In the course of this rite a young plantain was inserted into her vagina and she had to sleep on plantain leaves for one month. For this whole time she was not allowed to bath herself, the young plantain was also not removed until the month was over. After these women had told their stories, it was time to lighten the mood and  for OGCEYOD’s Ndifang Gisele to teach the “Break the Chain” dance, which goes with Tena Clark’s song of the same title to the participants. The song was specially composed for the “One Billion Rising” campaign, and next to the content of the campaign it is an additional link between the different Risings worldwide. The women participated enthusiastically, and after Elvis Wepngong’s closing words the women started to stream out the courtyard of the Center.

This event leaves us excited and motivated to keep working on the issue of domestic violence and stepping it up another level to help women find solutions for these kinds of situations. 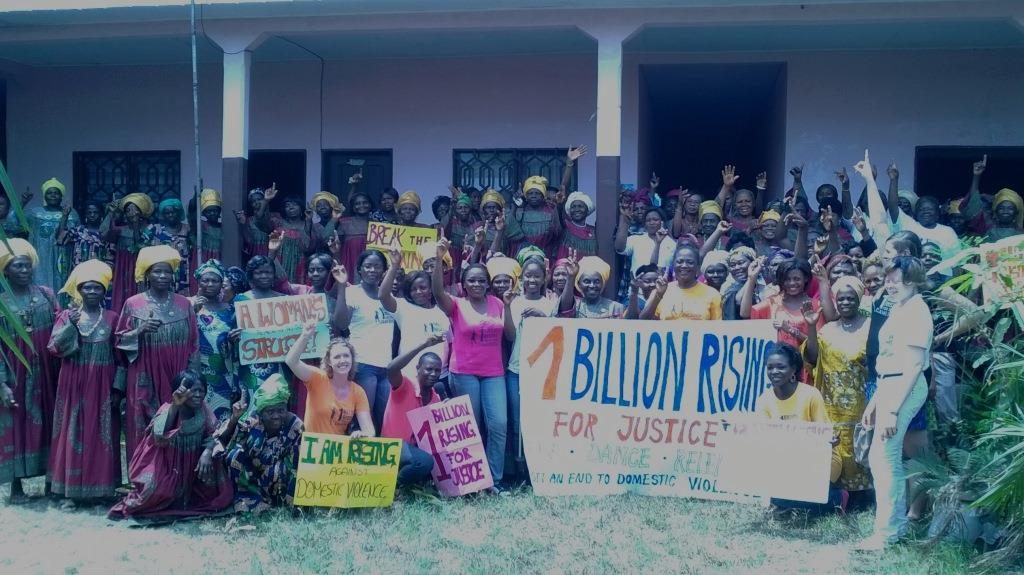 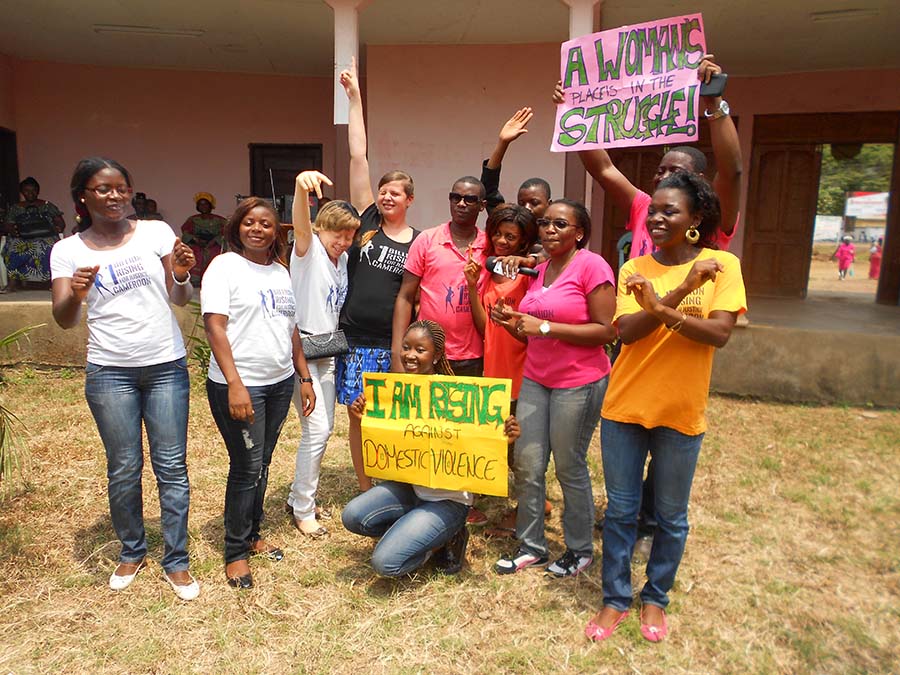 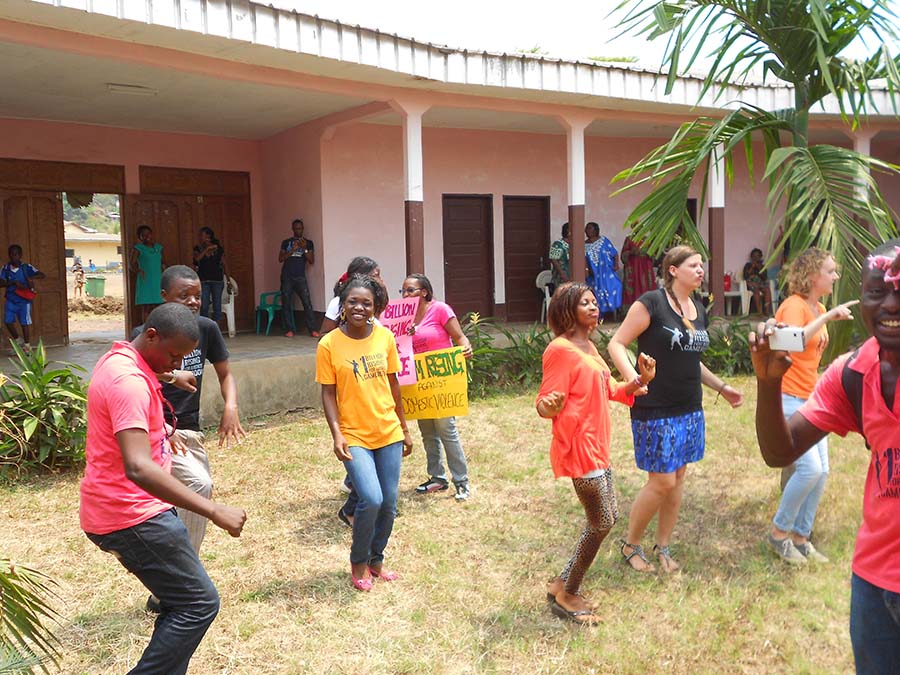 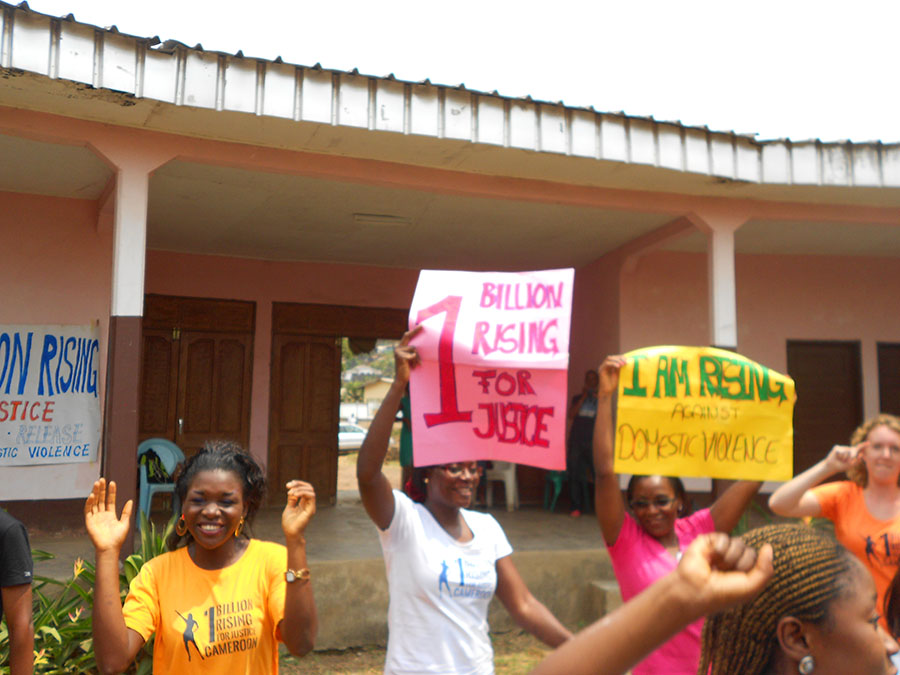 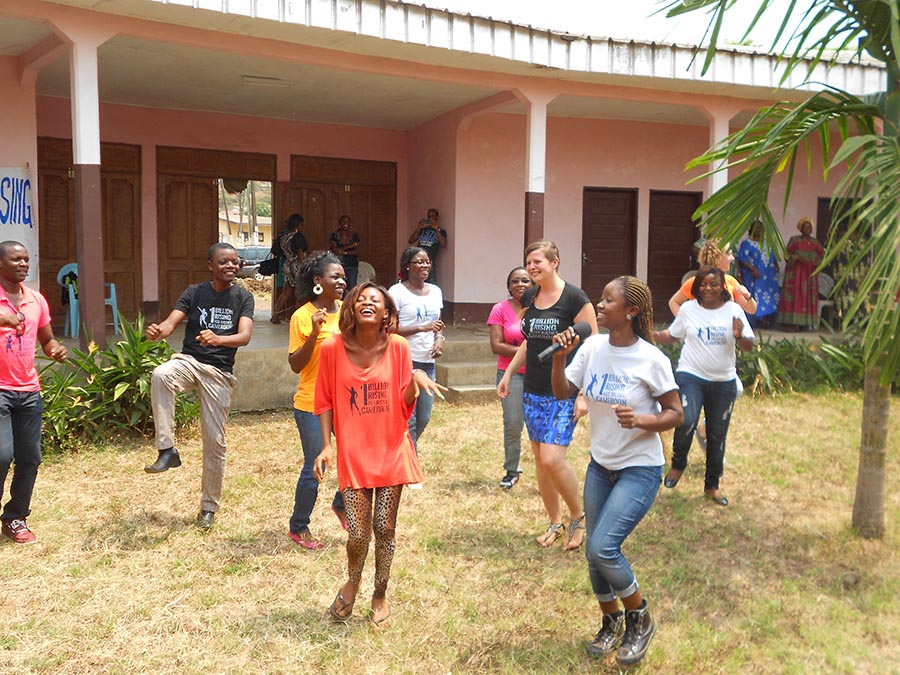 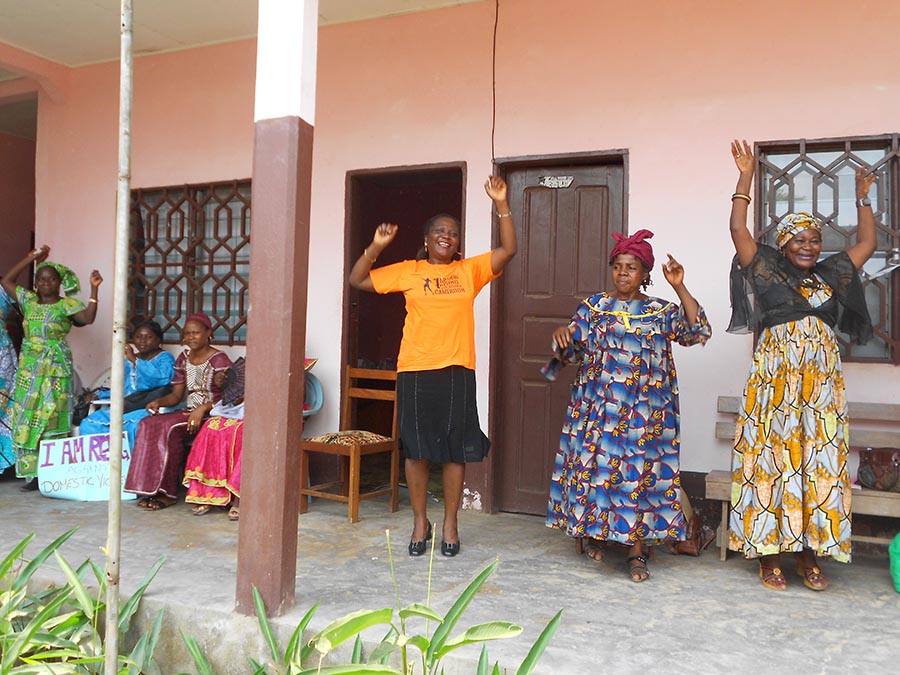 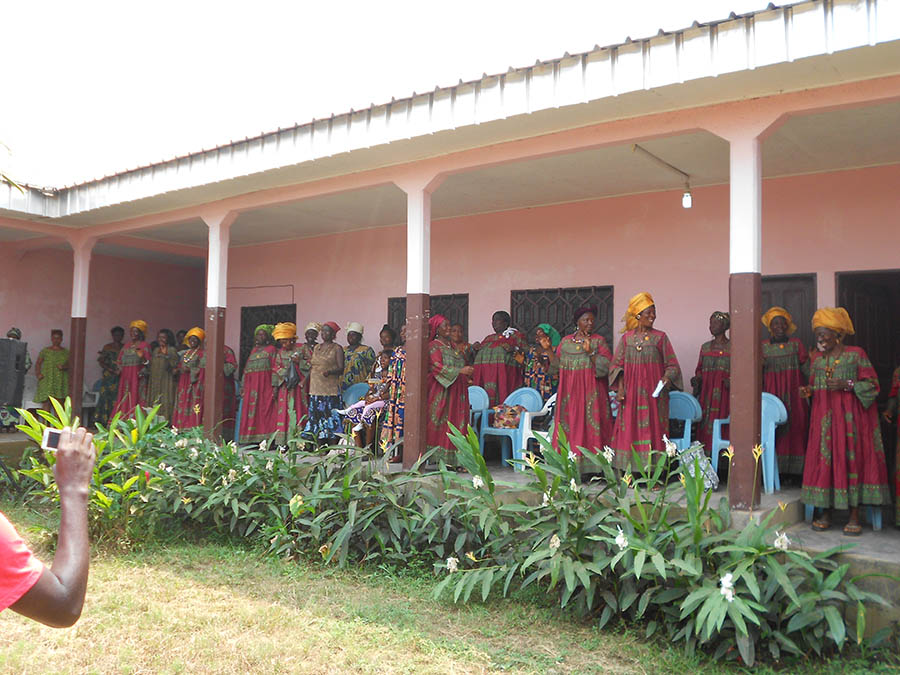 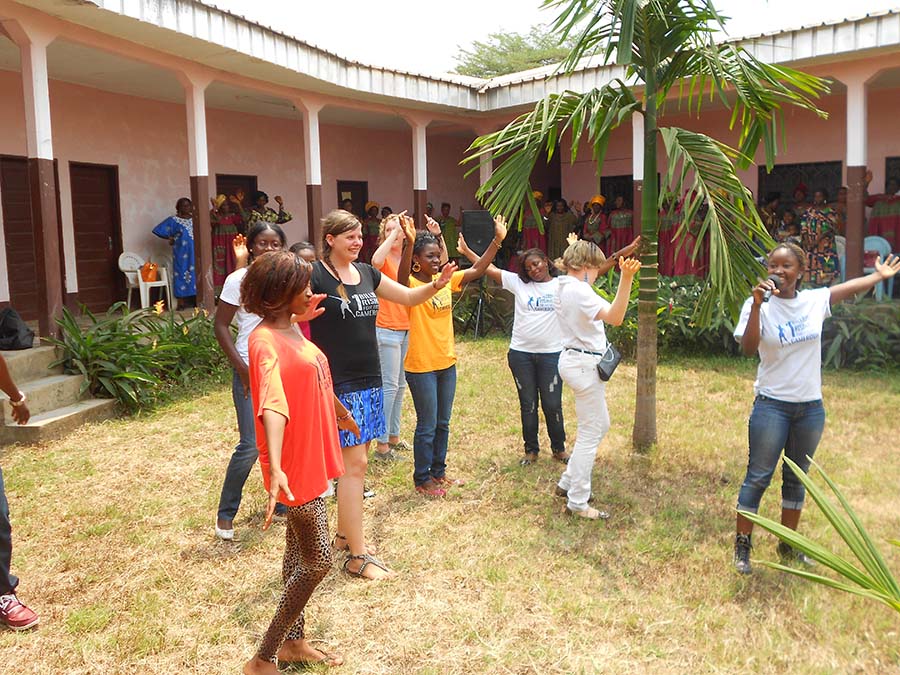 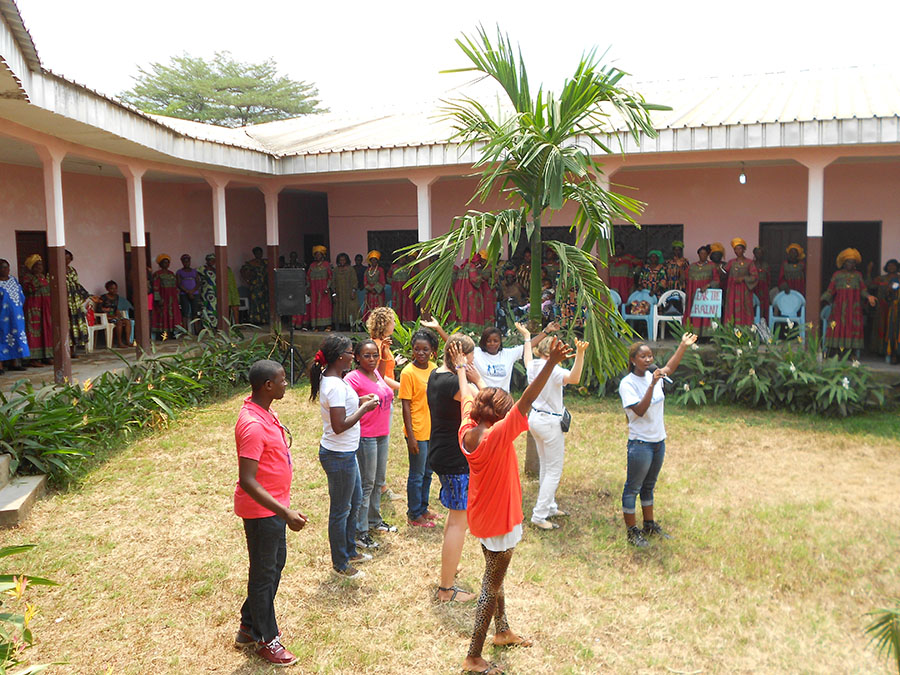 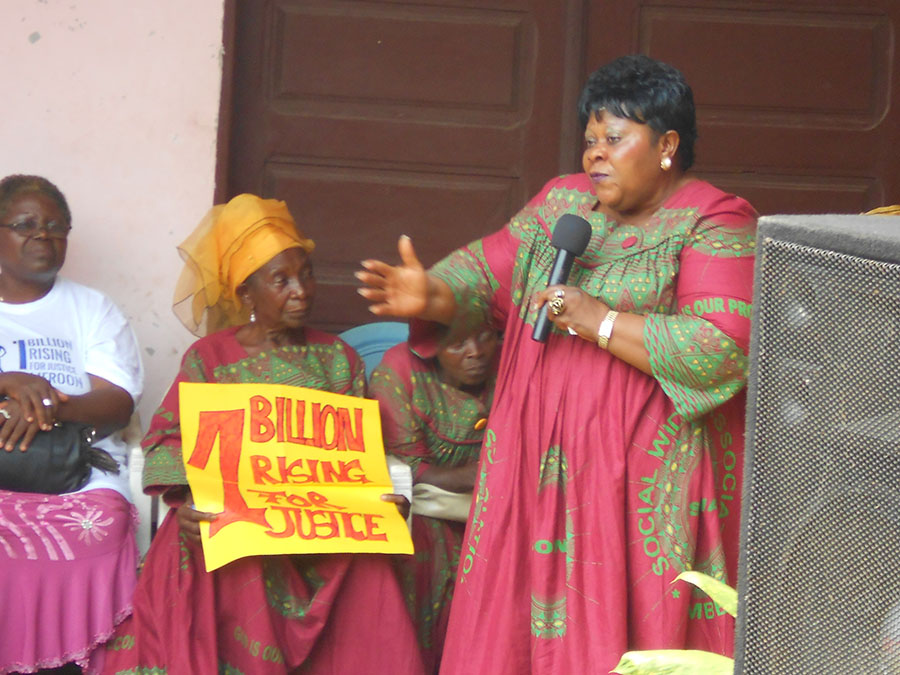 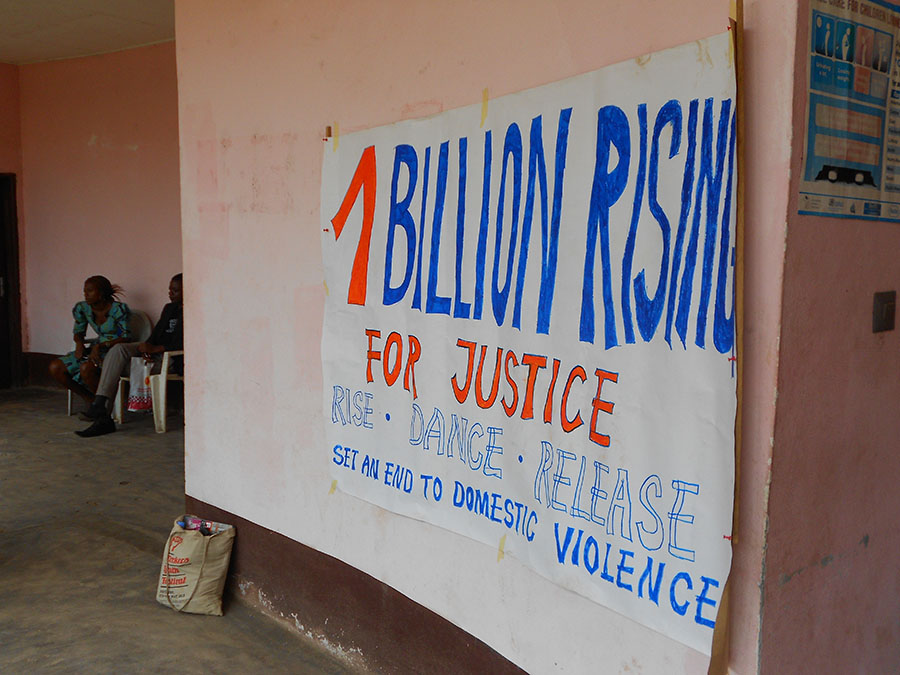 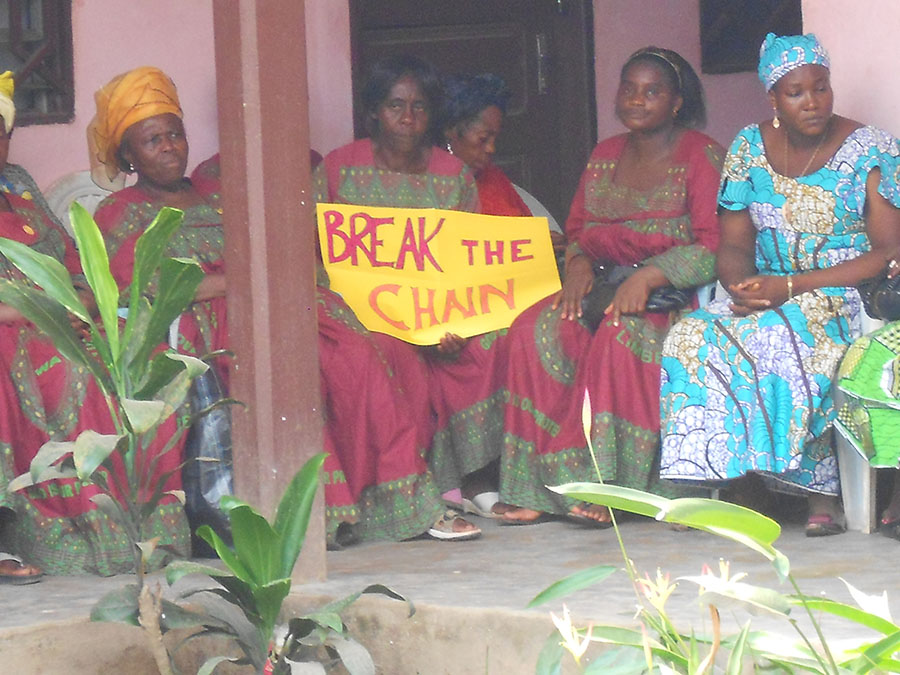 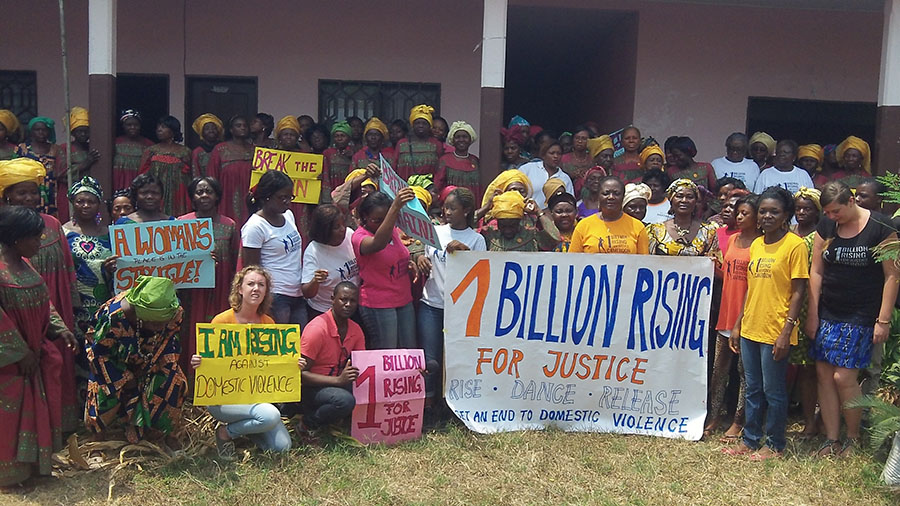